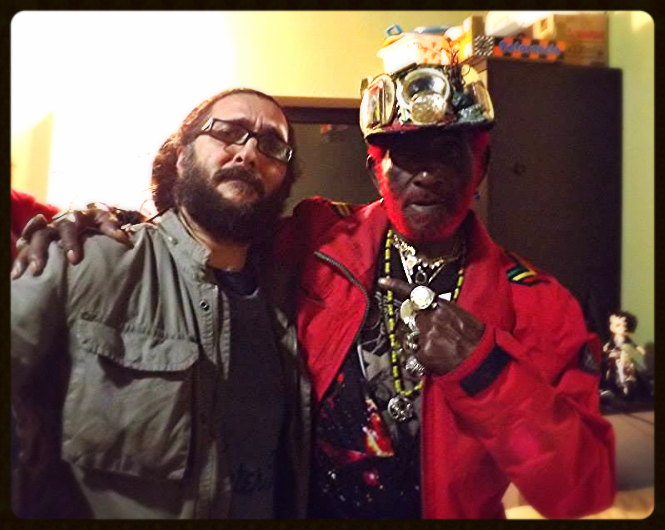 Jam Ra Records label is directed by Dubital, the pioneering dub artists collective who were the first in Italy to perform “live mixing sessions” on stage ( in 1994 that practice was considered more or less a technical “blasphemy”, for each Venue’s Service sound engineer!), mainly in the electronic/acid jazz/ambient circuit. A friendship with Lee Perry goes back to summer 1996, when Raffaele Ferro, aka Rankin’ Alpha, (one of the founders of Dubital in 1992, alongside Matteo Magni), met Lee and Mireille Perry in Rome, thanks to Neil Fraser aka Mad Professor, after a show with the Ariwa Band. At that time Dubital had already created dub and reggae productions for an independent Label (Suiteque), collaborating with, amongst others, Mad Professor and Zion Train. Over the years Raffaele interviewed Lee Perry several times and translated into Italian and commented on parts of his official biography, written by David Katz: “People Funny Boy – The Genius of Lee Perry”. The friendship with Lee has continued, and his support has been precious and educational. Special thanks are due to Mireille who made possible the realization of this record and all artistic products connected to it. Each item and every work was supervised and approved by Mireille and Lee with important technical support from Noel Campbell, who engineered the voice recording sessions and supported Dubital in the production.

Dubital’s last album was in 2003. During the past decade, they have continued to produce and work with international and local artists, waiting for the right moment to create a label of their own. Their love for electronic music, soul, reggae, dub, ambient and psychedelica, opens a multitude of possibilities for future projects, including artists from the past. In 2014, a live band consisting of musicians cultivated by Rankin ‘Alpha & Dubital backed Lee Perry for a fantastic show in the famous Pistoia Blues Festival (ITALY). The event set solid foundations for projects and productions to come. In recent years Rankin ‘Alpha & Dubital maintain the connection with Scratch Perry and family, receiving a wealth of ideas, encouragement, approval and blessings for all their new work. It is difficult to convey through words certain feelings; Lee Perry not only represents the beginning of Jamra, a small label with wide horizons, but also gives the enthusiasm necessary for the start of every activity, and every adventure. May God bless, as Lee and Mireille have always done, this young and stubborn artistic/record company.

This website uses cookies to improve your experience while you navigate through the website. Out of these, the cookies that are categorized as necessary are stored on your browser as they are essential for the working of basic functionalities of the website. We also use third-party cookies that help us analyze and understand how you use this website. These cookies will be stored in your browser only with your consent. You also have the option to opt-out of these cookies. But opting out of some of these cookies may affect your browsing experience.
Necessary Always Enabled
Necessary cookies are absolutely essential for the website to function properly. This category only includes cookies that ensures basic functionalities and security features of the website. These cookies do not store any personal information.
Non-necessary
Any cookies that may not be particularly necessary for the website to function and is used specifically to collect user personal data via analytics, ads, other embedded contents are termed as non-necessary cookies. It is mandatory to procure user consent prior to running these cookies on your website.
SAVE & ACCEPT